Client: The Babtie Group for Forth Forum

nes provided the ecological input for a study investigating the feasibility of managed realignment (setback) at Skinflats, downstream of the Kincardine Bridge on the Forth estuary, central Scotland.

Managed realignment involves either the breaching or complete removal of the seawall to allow formerly claimed land to revert back to inter-tidal habitat, with consequent habitat creation and, sometimes, flood alleviation benefits. We reviewed the geomorphological and ecological considerations of setback, plus ecological effects, including successional pathways and time-scales. We concurrently investigated the ecological and geomorphological dynamics of the marsh at Skinflats via survey.

Finally, we predicted the relative amounts of mudflat and marsh types that might form under different scenarios on the potential setback site, with considerations of impacts on the existing habitat, which includes mudflat supporting nationally important shorebird populations. 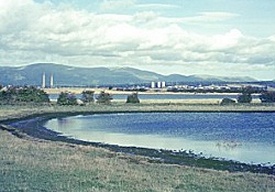