Between 2013 and 2015 we provided Ecological Clerk of Works (ECoW) cover for SSER at Strathy North windfarm in Northeast Sutherland. As well as the usual environmental issues, such as protected mammal species (water vole, pine marten and badger), bird deterrence and sediment mitigation, there were additional challenges associated with working on deep peat (including large scale felling) and with the presence of nesting greenshank. 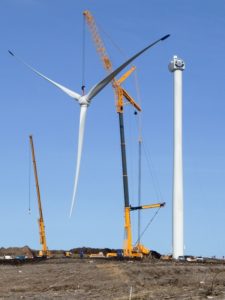 The release of aluminium was recorded during water sampling. This was shown to be the result of naturally very acidic water from peat mixing with exposed acidic mineral soils, and also due to increased suspended solids washing from mineral soils.Specialised mitigation put in place to deal with the phenomenon included reinforced suspended solid mitigation, particularly where pumping from turbine bases, and the minimisation of the amount of standing peaty water where ponded on mineral soils.

In 2015 Greenshank were found to be nesting in several places in the south of the site, close to turbines in the process of being powered. Appropriate exclusion zones were put in place that allowed the birds to continue nesting undisturbed by works. 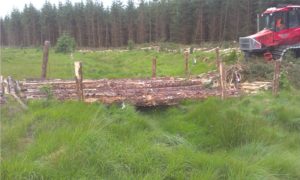